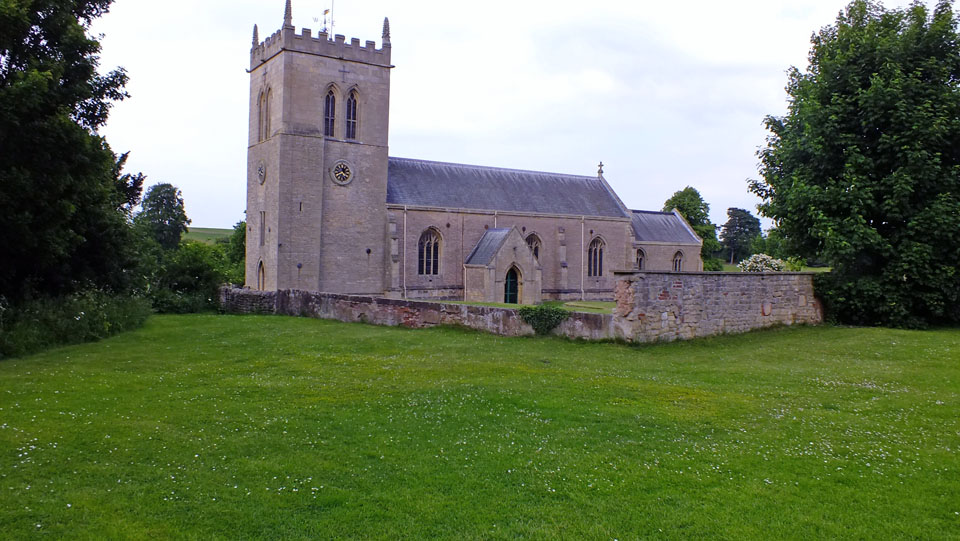 A new local history group has emerged following the passions of local history enthusiasts in and around the Cuckney area. The Battle of Hatfield Investigation Society (BOHIS) was formed by Joseph Waterfall and Paul Jameson. Their aim is to investigate an alleged mass grave underneath St Mary’s Church in Cuckney and beyond to ascertain the age and possible identity of the burials. Circa 200 skeletons were reported to be there by workmen placing concrete reinforcement plinths under the church in 1951.

Professor Maurice Barley visited the site whilst the work was in progress; however, most of his information regarding the finds came second hand from the contractors working on the site and from the Reverend W.E Ashworth Lound who was the incumbent at the time. A plan to have the skeletons examined by an expert fell though for reasons unknown and it is unclear as to whether Barley ever  saw the skeletons himself as in his report on the occurrence in the 1951 volume of the Transactions of the Thoroton Society he states ‘the skeletons, said to be those of young males, lay very close, indeed jostled with each other in the trenches’. This appears to indicate that he may not have actually seen them for himself or at least had a very limited view. He also wrote that ‘the first remains met with were about one foot below the present level of the church floor, and in places they were found as much as seven feet down’. No finds were made to indicate a time period or the reason for the internments. There was no evidence to suggest that any of the skeletons had met with a violent end, Barley reported that only the lower parts of the bodies were encountered and the whole of the skeletons were not exposed.

As the grave is situated underneath the church’s foundations it predates the building which is circa 12th century. St Mary’s Church is set within the inner bailey of Thomas de Cuckney’s motte and bailey castle. The castle was built during The Anarchy in the reign of King Stephen (1135–1154). In their 1992 report English Heritage described the skeletons as occupying three or four communal graves; trenches were dug north to south so that their bodies could be laid with their feet to the east. This may signify Christian burials, but it may also mean that those who buried them were Christians, rather than those who were buried, King Edwin was after all a converted Christian. The burials that were exhumed during the work in 1951 were reinterred in a fresh communal grave but its whereabouts and records are as yet unknown. English Heritage believe that the skeletons were from a skirmish during the Maudian Rebellion (The Anarchy) but over the years there has been a growing number of historians who believe that these skeletons could belong to the army supporting King Edwin of Northumbria during the Battle of Hatfield in 633 against King Cadwallon of Gwynedd and Penda of Mercia. On 12 October 633 Edwin lost his life there, along with his son and heir Osfrith who was killed just before him; Edwin’s head was allegedly cut off though by Cadwallon who displayed it on the ramparts of York’s city walls following the ravaging of the land of the Northumbrians. Edwin’s surviving men moved his body to nearby woods burying it there until it was safe to move again. Later it was taken to Whitby Abbey for burial where Edwin’s niece Hilda was the abbess. Back in Nottinghamshire legend says that the site where his body had lain became a holy site and a wooden chapel was built there which became known as Edwin’s Place, or Edwinstowe, ‘stowe’ meaning high or holy place, hence ‘Edwin’s holy place’. During the reign of King John a hermit was paid to live and pray here until the service was ceased under the rule of Henry VIII and the dissolution of the monasteries. In 1912 the sixth Duke of Portland erected an iron cross and a tablet to mark the site.

When the Venerable Bede wrote of the ’fierce battle fought on the plain called Haelfelth’ he may have been referring not to the village of Hatfield Chase in Doncaster, where the battle has long been thought to have taken place, but to the greater administrative area of Hatfield which extended into Nottinghamshire. Sanderson’s Map of 1835 clearly shows Hatfield Grange and other Hatfield buildings alongside the small parish of Cuckney. The Doncaster site was favoured by William Camden, a seventeenth century English historian, possibly due to a lack of knowledge of the Nottinghamshire site, and over time his hypothesis became widely accepted as fact. There is more circumstantial evidence to support the battle site being at Hatfield, Nottinghamshire, and the Doncaster claim is little more than its name, although there are still many supporters who believe that Doncaster is the site of the battle. The BOHIS have a great challenge ahead of them but Cuckney’s offerings, combined with Edwin’s holy place, plus the possibility of a mass grave, seem tantalising clues to an event that until recently was all but forgotten. One of the society’s first quests, after gaining all permissions from relevant parties, would be to locate the bones that were reinterred and also, if permission is granted, to see how far outside of scheduled areas the mass grave extends and see if they can excavate and date the skeletons. They are still trying to locate further photographic evidence and any memoirs of those who attended the discovery at the time.

There is also growing speculation that the recently discovered Staffordshire Hoard, made up of remnants from a battle (the valuable parts of swords and other pieces of armoury stripped off for ease of transport), was loot taken by King Penda of Mercia after his defeat of King Edwin of Northumbria after the Battle of Hatfield in 633. The Staffordshire Hoard dates to this time period and would fit well into the rest of the circumstantial evidence of Penda or his followers returning to Tamworth or thereabouts, which was at that time the capital of Mercia, but there is no conclusive proof.

The society is currently in talks/working with Mercian Archaeological Services CIC, the Diocese of Southwell, the Parochial Church Council, Nottinghamshire County Council, English Heritage, the Council for British Archaeology, the Welbeck Estate and the Heritage Lottery Fund. They aim to begin their quest March 2014, if funding and permissions are sanctioned. If you would like to join the BOHIS or have any information that you think may help them you can contact them through their website at www.battleofhatfield.webs.com or email them on hcp1995@sky.com.