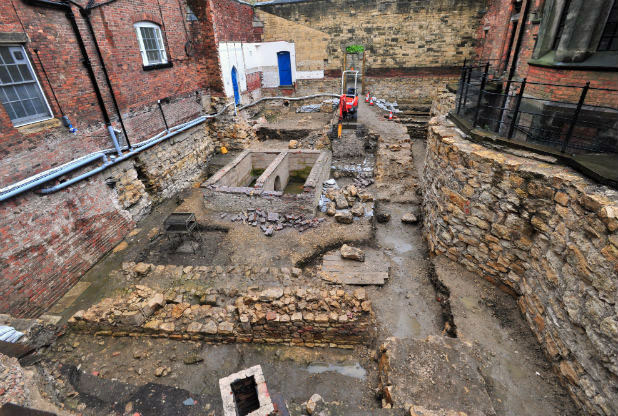 For those who live in the north east of the county, an interesting discovery has been made at Lincoln’s Norman Castle whilst archaeological excavations were being carried out there ahead of renovation work. Archaeologists working on a previously unknown church discovered a limestone sarcophagus. As the find was very delicate the archaeologists from FAS Heritage had laser scans done of its entirety and further exploration work with an endoscope revealed that it contained an adult skeleton. When the sarcophagus lid was removed it revealed the body of a young man in his 20s and around his feet were the remnants of his leather boots or shoes. This footwear was made from single pieces of leather held to the feet using thongs. The skeleton showed no signs of living a harsh life and it has been assumed that he may have been a member of the clergy. Evidence of pottery fragments suggests that the date is circa 10th or 11th century, although no radiocarbon dating has been carried out on the bones as yet and a more accurate date will hopefully be given once this occurs. A facial reconstruction of the skull will also be carried out. Eight other burials have been found nearby and further exploration will be carried out to see when they died, if they were a family group and if the young man was a local Lincoln lad or one of the Anglo-Danish hierarchy appointed throughout the Danelaw. The £19.9m Castle Revealed project will see the building of a new centre to house the Magna Carta and a tower to give access to the castle walls. These recent finds will also go on display when it is completed in 2015.