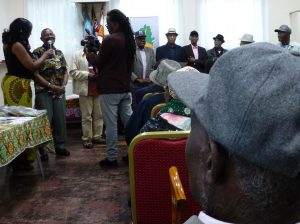 The ACNA (African Caribbean National Artistic) Centre on Hungerhill Road, Nottingham, was the venue for a unique showcase event, on 28th July, that celebrated the achievement and resilience of African Caribbean coal miners in Nottinghamshire.   The evening was part of a Project, funded by the Heritage Lottery Fund, and managed by Norma Gregory. The project has been recording the lives and experiences of miners of African Caribbean origin through oral history, exhibition material and artefacts. Objects on display were from Norma Gregory and Bilsthorpe Colliery Heritage Museum. The Project is being filmed by TV for the Inside Out series.

During the evening many former miners gathered at the front of the hall to talk about their lives and share their experiences with the audience. Calvin Wallace was born in St Ann’s, Jamaica, and moved to England in 1959 when he was 29 years-old. He worked at Gedling pit from 1976 to 1987. Quite a number of the miners worked at Gedling pit. It was called the ‘United Nations Pit’ but others worked all over the county. One miner, who was at Welbeck Colliery, said that he spent 12 years underground and recalled that he felt as if he had been ‘buried alive’. Despite the hardships, most felt that the good wages enabled them to lead a secure life. One remembered that as a sheet metal worker he could earn £10.50 but could earn £18 as a miner.

Norma Gregory, who set-up the project and is the manager thanked all the miners, their families and the project volunteers who had come together as a team. It was a very moving event and the old friendships from the mining years and the need to support each other in difficult times shone through the whole occasion.