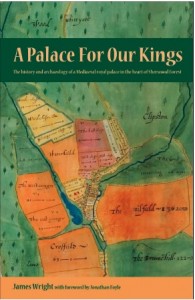 James Wright archaeologist, architectural historian and author has recently completed a book on the mediaeval palace at Kings Clipstone in Sherwood Forest. It is based on over twelve years of research and is the first full length detailed text on the site since 1890! Known to many as King John’s Palace, the site was once one of the very largest and most important royal palaces in Mediaeval England.

The palace was visited by eight kings who held parliament, Christmas feasts and tournaments; were visited by the king of Scotland, a papal envoy and traitorous barons; built a fortification, great hall and a stable for two hundred horses; went hunting, drank wine and conceived a prince; listened to storytellers, poets and singers.

James Wright is a Senior Archaeologist at the Museum of London Archaeology. Formerly he has worked as a conservation stonemason. His previous publications include a book on the Castles of Nottinghamshire and several journal articles relating to castles and palaces. Alongside fieldwork at Mediaeval buildings such as the Tower of London, Knole, the Palace of Westminster and Southwark Cathedral he has researched the history and archaeology of Kings Clipstone for over twelve years.

Jonathan Foyle has contributed the foreword to the book. He is a broadcaster, journalist and historic buildings consultant with a background in heritage conservation, research and curating buildings such as Hampton Court. He is Visiting Professor in Conservation at the University of Lincoln and has authored monographs on the cathedrals at Lichfield, Lincoln and Canterbury.

The book will be released via Triskele Publishing – www.triskelepublishing.com– on Friday 24th June.