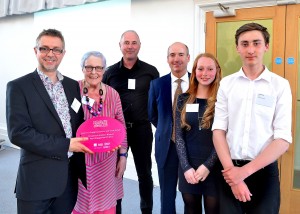 The Framework Knitters Museum, Ruddington, has been hugely successful at the East Midlands Heritage Awards. The textile museum won the Award for Engaging Children and Young People, and was Highly Commended for the Award for Innovation.

The Award for Engaging Children and Young People was awarded to the museum for a unique collaborative project to redevelop the museum undertaken with Rushcliffe School. The £100,000 redevelopment was made possible by the Heritage Lottery Fund and Museums Development East Midlands. It included improvements to the historic site and the visitor experience, as well as the launch of two new galleries and a ground breaking new education programme. The students were involved with the planning and design of the redevelopment, and they also starred in a unique interactive educational film and helped to develop the script and contribute to the production process.

It is not unusual for museums to consult with their community and audience when creating new exhibitions, or conducting a redevelopment, but where this project stands out is how involved the group of students were. At each stage of creation and production they were given a chance to review what was going on and provide input, interacting with the museum and film professionals, in a frank and honest way. The consultants involved in the project were contractually required to work with the students which gave the pupils a unique opportunity to work alongside professionals. The students were also given the opportunity to meet with the museum’s marketing consultant to discuss how the redevelopment was going to be promoted.

The museum was Highly Commended in the Award for Innovation for the film that forms the core of the museum’s new education programme. The film, which was partly funded by Nottinghamshire County Council, engages the audience by allowing them to control the story by making key decisions on behalf of the lead character. Using the historic background of the Luddite riots it encourages the viewer to consider the decisions modern-day children and teenagers face regarding peer pressure and criminality. The film was recorded on-site at the Framework Knitters Museum, and at the Galleries of Justice Museum.

Paul Baker, Museum Manager, said, “we are thrilled to have been so successful at the East Midlands Heritage Awards, both for ourselves and the students we worked with at Rushcliffe School. The partnership was a great experience all round, and we are incredibly proud of what we achieved”.

This is the second awards competition the museum has achieved success at recently. They won the Websites and Online Content Category, with the interactive film Breaking the Frame, at the European Heritage in Motion Awards last month.

For more information please visit Framework Knitters Museum, or contact the museum on 0115 984 6914 or office@frameworkknittersmuseum.org.uk.