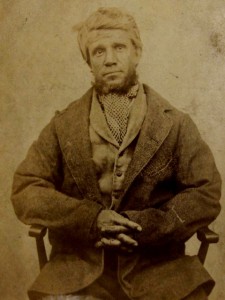 I hope that many of you recently took up the offer of two for one tickets to see the Charlie Peace play. When I give talks on the subject of common lodging-houses in Narrowmarsh, Nottingham occasionally members of the audience would refer to Charlie Peace, the villain who stayed there for a while. During my extensive research of the Narrowmarsh area, I never once came across Mr Peace, so when I met Michael Eaton MBE, the award winning playwright who penned the recent production of Charlie Peace: His Amazing Life and Astounding Legend which ran at the Nottingham Playhouse 4–19 October, I took the opportunity to see the play and learn more about Charlie’s life. It seemed that Charlie lived under a different name whilst in Narrowmarsh, hence the lack of records for him, also he was in the town between censuses (1871–1881) so he was not recorded. A newspaper report in the Nottingham Guardian dated 8 December 1876, entitled ‘The Sheffield Murder’ gave his aliases as George Parker, Alexander Mann and Paganini. The writer of the article assumed that he would be lying low until he was forgotten about and then head for a port and overseas, some who knew him believed him to still be in Sheffield, but Charlie had made his way to Narrowmarsh to lodge with a Ma Adamson, who does not appear in the census either. 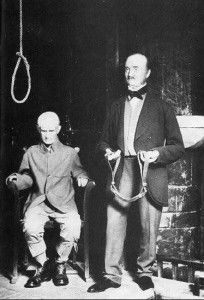 Charlie Peace and his executioner

During my research on the area there were people who gave false names to avoid being identified, in the 1881 census both Isaac Newton and William Wallace were recorded as living in lodging-houses in Narrowmarsh and were never again identified on censuses before or after. The newspaper description of Charlie was given as:  ‘thin and slightly built, 46 years of age but looks ten years older, five feet four or five inches high, grey (nearly white hair), beard and whiskers, (the whiskers were long when he committed the murder, but may now be shaved off), has lost one or more fingers on left hand, cut mark on back of each hand, and one on forehead, walks with his legs rather wide apart, speaks somewhat peculiarly, as though his tongue was too large for his mouth, and is a great boaster’. Charlie was eventually caught in London after committing many burglaries. Michael Eaton believes that Charlie may have carried out many in Nottingham that were not attributed to him — a worthy research project for anyone with an interest. A book on The Common Lodging-houses of Narrowmarsh is due to be published next year thanks to the Nottinghamshire Local History Association, please check their website  for updates.