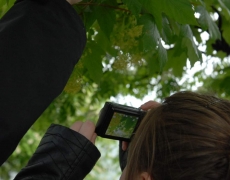 Nottingham CIC, LandLiesFallow has received a grant from the Heritage Lottery Fund, Young Roots, to deliver a project called Sherwood Forest on Your Doorstep : people, places, hidden histories along the ancient perambulation route. The walk will be led by Beeston arts worker, Dave Wood, who ran a similar project in 2011 funded through the Arts Council/National Lottery. We’re all looking forward to your company.

From late March through until November 2016, Dave will walk the route with participants in stages. Sound artist, Rebecca Lee will accompany to record the stories, feelings, histories of people walking it and the sounds of the landscape around.

Later stages will run throughout the year.

Along with the walk there will be projects across Nottingham and the wider county with young people and communities to connect people with their local heritage and nature. Young people will work with digital technology, sound artists and  community archaeologists to uncover and showcase the hidden histories in their area in a new and exciting way. Findings will be edited for the online archive (website), sound booths in libraries and a Nottinghamshire Archive. A mobile phone app will be created to celebrate the perambulation route and the histories of communities along it.

Anyone who is interested in taking part should  email Sian on Sian.Stammers@gmail.com or Dave Wood davewrite2002@gmail.com to express an initial interest, leaving a phone number if appropriate. If you were on the last walk, it would help if you said in what capacity. Alternatively, phone Dave Wood  on 07709977684

Time to get the walking boots on. Bring some money for getting back home as well as packed lunch (or money for sandwiches/drink). There will be photography and sound recording; please advise if you’d prefer not to be recorded/photographed. All events are free.