The Parish Church of St John the Baptist stands amidst ancient pasture on the south-east corner of this small village. The site itself is quite distinctive, consisting of three large open fields with a few cows or horses, and only the 18th century farm buildings in view across the road. It is a haven of peace, an untouched corner of old England. 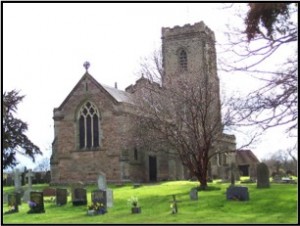 For many years local villagers had believed that the area around the church was once the site of a Roman villa, but there was no direct evidence of this. Roman activity in the area included the alleged discovery of Roman coins when the great Central Railway cuttings were excavated at East Leake, and a villa was found on the hillside between Gotham and Thrumpton. In Leicestershire it is thought that there is Roman archaeology at Cotes and across the river at Loughborough. It seems fairly clear that the Soar Valley, and probably the river itself, were used by the Romans as a route to the important Trent crossing at Redhill. So a villa at Stanford is perfectly plausible.

Potter’s claim
On page 3 of his book on the History of East Leake (1903) our former Rector, Rev. S.P. Potter had noted “… a tessellated pavement unearthed in Stanford churchyard, when the graves of Mr H. Ratcliff and his little daughter were made in 1902.” This was in or near to the Ratcliff family enclosure (Buchanan,2012) immediately next to the south wall and tower. 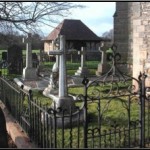 The claim was later investigated by visitors from the Thoroton Society (the county’s historical society) in its Transactions of 1910: “In the [Stanford on Soar] churchyard, at the south side of the tower, [a] tessellated pavement was discovered about 4 ft below the surface; and again at a later date, about 4 ft further south, another part of the same pavement was again laid bare. The tesserae were stone – grey, blue, and white”. The 1922 Kelly’s Directory of the county included Stanford on Soar as “a Roman settlement”. Much more recently, the new and authoritative “Roman Nottinghamshire” (Mark Patterson, 2011) linked these claims to the discovery at Stanford of a Romano-British “ToT ring” of the Corieltauvi tribe of the period (pp. 75-76). Chapter 8 on the Roman villas themselves states that of 600 confirmed villa sites in the country, only 13 are confirmed in Nottinghamshire plus “evidence for two others at Willoughby-on-the-Wolds and Stanford-on-Soar” (p. 209). Only five of the 13 have provided evidence of mosaic flooring (p.210). So, proven villa sites are rare in our county. It is well known that English Roman villas are large establishments, extending over a considerable area and incorporating farm buildings and workshops, etc. So the remains of any Roman villa at Stanford would most likely be lying well beyond the area of both the present church and its graveyard.

It is likely, too, that in the adjacent fields might be found the foundations of an even earlier pre-Roman or Iron Age settlement, given the finding of the Celtic or Iron Age “ToT ring”. And following the Romans, after 410 AD, the Anglo-Saxons probably used the site and material from the ruined villa to create the first Medieval settlement lasting until the Norman invasion in 1066. It seems that the whole area around the church would thus have considerable significance for all local historians and archaeologists.

Call in an expert!
Recent planning applications for development of the fields around Stanford Church led us to make some enquiries. Our committee decided to ask the County Archaeologist for her opinion of the Potter claim. Ursilla Spence expressed great interest and offered to meet our committee. Here she surprised us by supporting the “Roman villa” theory on the basis of what she had found at the church itself. Parts of the lower walls and particularly of the tower consisted of old Mansfield Red sandstone, which was and still is quite a rarity in this area. But the Romans knew of it, and loved to use it in their own buildings elsewhere in the county. So they would have brought it from the Mansfield area, all the way to Stanford, perhaps floating it up the river Soar. This was news to us, and we quickly decided to investigate for ourselves.

An investigation
One of our society’s members happens to be a churchwarden of Stanford Church and has taken a great deal of interest in its history. He had noticed the red sandstone but was unaware of its significance. He has long been interested in the Dashwood/Ratcliff graves, too, and so a double investigation seemed necessary.
For some time as churchwarden he had also been concerned about possible damp in the Dashwood family crypt. This lies below the south aisle of the church, and its roof forms the rather elaborate decorated floor tiles neatly enclosed within a low railing in that aisle. But vaults sometimes have a tendency to fill with water, to the general detriment of the structures above ground of course. The Stanford vault has no entrance within the church but extended, it was believed, under and outside the south wall. Could its original entrance be found to enable a proper examination of the state of the vault beneath? At the same time, though, it was realised that the crypt itself might lie at the same level as the area of the Roman mosaic, i.e. 4feet below ground, and if we could get into the crypt, we might see some evidence of Roman activity.
So four committee members duly arrived one day with wellies, wheelbarrow, protective sheet, spades and trowels. 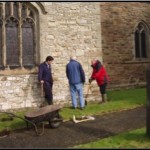 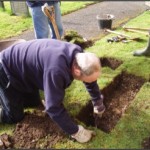 But then, finding a layer of concrete or plaster a few inches down brought us to a full stop. We had discovered that at some time in the past the entrance had been covered over in concrete, with a large arch formation which extended back and under the pathway. We could go no further, and abandoned this part of the investigation.
We then looked for the Mansfield Red sandstone mentioned by Ursilla Spence, evidence of reused Roman villa building material. And there it was, just as Ms Spence had said. 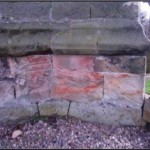 The north west corner of the tower

So the investigation had proved successful in one important respect – here was our first tangible evidence of the Roman villa, under the church all along. But there was more to come.
Potter was right!
Potter had described – but had provided no real evidence for – the existence of Roman mosaics in the Ratcliff grave enclosure. So we scuffed around, and found a recent grave inside the railings, but nothing else. Then, as we were leaving, another committee member arrived. David Chapman calmly walked up and asked us if we would like to see what he had in his hand. And there it was, our first – the first – Roman mosaic tile, unearthed after about 1700 years. David had found it, next to one of the graves inside the railed section, just where Potter had said it was. It must have been accidentally dug up by a sexton during a burial, and was just lying on the surface. Here it is, measuring about 3cm cube, and photographed next to a £2 coin for comparison. 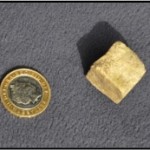 The tile – strictly a tessera – is of local limestone (ashlar) and is very roughly cut. It shows yellowish in the picture due to the effects of the flash, but is actually a dirty-looking off-white. It has been confirmed by Ursilla Spence as definitely a Roman mosaic tessera. We had found evidence of our Roman villa, just as Potter had said in 1903.

So what now? The tessera will be placed in our archive and a report sent to the appropriate authorities. We do not expect that this discovery will shake any foundations but it does add considerably to our knowledge of Roman activity in the area.