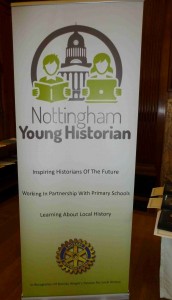 The future of local history in Nottingham received a major boost at an awards ceremony in Nottingham’s Council House on the 20th May 2015. Around 1000 children in Primary Schools all over Nottingham are estimated to have participated in a project based on research into local history topics. The topics were linked to diverse work that followed the National Curriculum. The awards were established by the Wright family in remembrance of Brenda Wright who had been a passionate interest in local history and who was for some years a guide for the city. The awards were organised by Andrew and Adrian Wright, Brenda’s sons. The event was supported by The City of Nottingham Rotary Club. The awards evening was hosted by the Wright brothers and the awards were presented by the Sheriff of Nottingham, Councillor Mohammed Saghir. 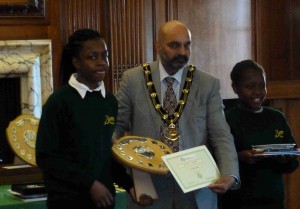 Chris Weir, the NLHA vice chairman attended the event as a guest and the possible involvement of NLHA in the event next year was discussed.